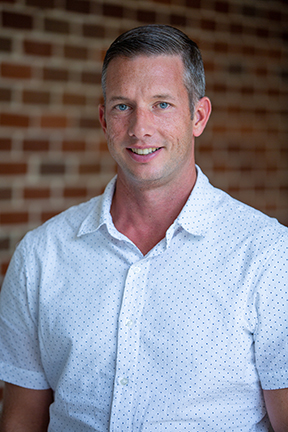 SILOAM SPRINGS, Arkansas (Dec. 1, 2022) – John Brown University announced today the appointment of Ryan Ladner, as the next vice president of enrollment management, after a national search. Ladner is slated to begin in the role on June 1, 2023, and succeeds Don Crandall, vice president of enrollment management, who retires in May 2023 after 30 years in the role and 38 total years of service to the university.

Ladner, who holds a Doctorate in Business Administration, also becomes a member of the President’s Cabinet, an eight-person team that works with JBU President Chip Pollard to set the strategic direction for JBU and oversee and implement planning, major initiatives and policies.

“John Brown University has been a huge blessing to my family and me for over eight years, and I am honored to be a part of this community,” said Ladner. “I have enjoyed working with our faculty and staff in the Soderquist College of Business to launch new programming and expand business enrollment. I am excited to continue at JBU, serving in a capacity that connects my professional, scholarly, and academic experience. It will be a daily privilege to honor God by collaborating with our enrollment team, administration, faculty, staff and students to shape the future of JBU and recruit students to this institution that means so much to so many people.”

In April, Ladner was appointed as a special advisor to Kim Hadley, DBA, JBU’s chief operating officer, to direct the enrollment team and strategies for the graduate and online undergraduate programs during personnel transitions. Both programs have seen impressive new student enrollment growth under Ladner's leadership in the past six months.

"Ryan is an innovative leader with expertise in higher education admissions and marketing," said Hadley. “Over the last several months, Ryan led the graduate and online admissions team to dramatically improve the effectiveness and efficiency of the admissions processes. I have personally watched that team thrive under his leadership, and I am confident that Ryan will excel in his new, expanded role as vice president for enrollment management.”

With Ladner’s appointment, the enrollment teams for on-campus undergraduate, online undergraduate and graduate programs will be centralized under his leadership.

Ladner obtained his Doctor of Business Administration from George Fox University, where he wrote his dissertation on “The lived experience of college choice.” He also has a Master of Arts in Theological Studies from Liberty University, an MBA from Mississippi College and a bachelor’s degree from The University of Southern Mississippi.

Back to Press Releases